I said in my last post that I’d try to post mid-week… Well, it is in fact mid week, just a week later than I planned for. Right now I am on Spring Break, so I figured now would be a nice time for an update.

First off, as I mentioned some time ago, I was fortunate enough to go on a trip to New York City with my senior class. IT.WAS.AWESOME. The largest city I’d ever been to before this trip was Chicago, and I don’t even remember it all that much. I’ve made numerous trips down to Indianapolis, but Indy pales in comparison to the Big Apple, too.

Much of the time we were forced to remain in tour groups, but when my friends and I got the opportunity to explore, you can be damn sure we took advantage of it. I ate pizza at the first pizza place in America, tried this addicting thing called gelato, and ran into some trouble when these people tried to give me their “free CDs.” I had to wait for half an hour at a McDonald’s in time square to use the restroom (every bathroom in the big city is a one-holer, it seems). I saw the biggest Barnes and Noble I’ve ever seen, but unfortunately was unable to go inside due to time constraints. I even saw Zach Braff outside of his Broadway show. So much stuff happened that I don’t know where to start and finish! I have even more news to get through, though, so I’mma cap off NYC right here.

The second major thing that has happened to me recently involves college. I am officially enrolled in Butler University (for those of you who don’t know, it’s a private college in Indianapolis… they made two consecutive Final Fours a couple years ago)! I am extremely excited! I’m majoring in English with an emphasis on Creative Writing. I hope to hone my skills enough to where I can actually make a living out of telling stories. That would be so cool.

This last thing pertains a bit more to you guys: I bought a new book while at Butler University this Monday… It’s called Total Frat Move. I kinda bought it on impulse, but I’d wanted to read it for a while anyway. I pushed back our favorite Scientology book even further down the list. Like it or not, the next review I post will be of Total Frat Move. I’m over halfway done with it already, so you might just read said review on Saturday.

As for the status of OWOB in general, it doesn’t look so good right now, does it? We’ll continue to shoot for our goal, but I seriously could not have picked a worse year to start this. It’s gonna be rough, but I’m not about to lose hope!

I was gonna post pictures from my NYC trip, but for some reason I can’t get the file conversions to work. But here’s a pic of me from the top of the Empire State Building! 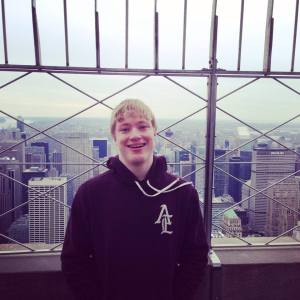 Anyways, I better get going. I have a lot of stuff to do (I’m always busy, busy, busy). Thanks for reading and I’ll seeya in a few days!