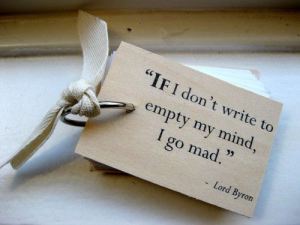 Realllly long and complicated story short: I’ve had a helluva weekend. It’s been loads of fun. On weekends like this, I usually don’t have time to write all that much. As I sat down earlier today to think of a blog post, I began to fall asleep at the keyboard because I didn’t get enough shut-eye on the nights prior.

Once I woke up from my 3 and a half hour nap, I tried my hand at this again… It’s been like an hour and I still don’t have much. I try to keep most of my posts somewhat writing-affiliated, and nothing new was coming to mind. I did, however, find an old essay from my junior year of high school that I’d like to share. I’m pretty proud of it to this day, which really tells you something because most of the time once I reread something I’ve done I feel like an idiot. It’s called I Believe in the Written Word, and I’m hoping it’ll give you guys some insight into why I do what I do.

LOL. I actually just reread the essay, and I’m nowhere near as fond of it as I once was. I was going to edit it before posting, but I’ll let you guys see the raw, unpolished thing that I was ever-so-happy with a year and a half ago.

I Believe in the Written Word

To me, there is something therapeutic about writing; it offers a brief escape from reality, into a world of my choosing. Be it a rant about the government or a world that I create, writing just helps me release emotions. I can convey what I have to say much more efficiently through writing than I could ever hope to with speech.

As a reader, there is nothing more satisfying than getting immersed in a story that you just can’t put down. Books have the power to literally change someone’s life. Self-help books have rescued the lives of countless people, while novels have caused others to question their entire way of thinking. Words are just that influential; they are stronger than steel, yet as delicate as the paper that holds them.

Words have the ability to reach people. Written down, they can go where verbal words cannot; they travel down a specific path until they reach their perfect audience: the anxiously awaiting reader. The most successful authors sell millions of copies of their books, and their voice gets heard by millions of people. The effect on the readers may not always be the one the author intended, but the reader is affected nonetheless. This again illustrates the power of the written word.

The late and great Ray Bradbury once said, “You must stay drunk on writing so reality cannot destroy you.” Truer words have never been spoken. Writing is the strongest alcohol, more powerful than any beer or hard liquor. Writers have the ability to do so many things, and whatever they write will have an affect on someone, somewhere. It isn’t necessarily what the writers write, but what the words say.

Written words are a reality of their own. They fall into their own universe, inhabited by authors and readers alike. Novels and poems bring together so many people from so many different walks of life, and words are the root of it all. Their power is undeniable.

I like to think of words like puzzle pieces; alone, they don’t do anything but when they are put together in just the right places, the create something masterful. Words are untouchable by any fire or storm; they live on, no matter the conditions. This is the true testament to their power; words live on when all other things in this world perish. I strongly believe that the written word is the most powerful weapon, and I will continue to do so until the day I die.

So there ya have it. Nothing too special this week. We’ll see where next week takes us. Thanks for reading, everyone!

One thought on “I Believe in the Written Word”