Reality has this funny way of knocking you down a peg just when things are starting to look up. There have been multiple times this year where I’ve ascended to what I thought was the top rung of life, to the point where I could almost see the light at the end of the tunnel… and then I’ve fallen on the last step and come crashing down to the bottom. I’m not going to go into specifics, but a little background is necessary for you to understand why I’ve been such a lazy bag of shit for the last three months.

There are two notable instances where I almost broke through, where I almost made to the top. Both occurred sometime between October and November. The first one happened during a time where I was as happy as I’ve ever been. I was loving college, loving life, and everything seemed to be falling my way. I didn’t think anything could go wrong. I was writing a lot, I had straight A’s, and I had lots of friends. Being away from home was awesome.

That all changed when I woke up in the hospital with no recollection of the prior night’s events. But that’s a story for another day. The big thing here is how it affected me.

For a long while after that, I wallowed in self-pity. How could I have fucked up that badly? This kinda stuff doesn’t happen to me! I’m invincible. (As I said, I thought I was livin’ the life.) My weekend habits drastically changed. I laid low and didn’t do a whole lot for a while. And it killed me. I hated not going out and hanging with my friends on the weekends. Eventually, I made it through this problem and things went back to normal. Then something happened that made my little trip to the hospital seem like one to the candy store.

This one I’m not going to go into any detail on at all, but this is the one that fucked me up for a looong time. A looooooooooong time. Basically, once this happened, I became a mess. I couldn’t get my thoughts straight; I was a walking ball of nothing. I would lay around for days doing absolutely nothing and be totally content. I developed the awful habit of wasting hours upon hours on the internet. I was doing anything I could to forget my problems. Looking back on it, I’m pretty sure I was going through some form of mild depression.

It was a bit of an odd first semester, to say the least. And while I can honestly say all of those issues are behind me, I still kinda have a problem. All the motivation I had before my incidents is still missing. I still waste too much time on the internet. I’m still content with doing nothing. I’ve fallen into a rut that I haven’t been able to get out of.

And that pisses me off.

I never thought I’d say this, but thank God for the weight room. I began going around November, at the very beginning of what were my worst days. I had some friends that had started to go, and I decided to tag along and see what it was all about. Anyway, we were going anywhere from 3-6 times a week, and as much as I hated it, I was glad I was there. Hitting the gym let me clear my mind for an hour and a half and I was physically benefiting from the process.

I kept up with this for a couple of months and I found myself continuing even after I didn’t need to lift for stress-relief. It was the most “productive” thing I did each day, but it was something. I looked forward to going every week. Things were looking up again.

In January, I had another fall from the ever so gracious ladder of life.

This wasn’t a major one, but it was still a downer. Lifting weights was the only thing I had going for me at the time, and I was forced to stop due to an injury. I haven’t been to the gym in damn near three weeks.

That brings us to today.

Today, as my friends were getting ready to head for the gym, I was sitting in my room on Facebook. The most recent thing on my newsfeed was a video entitled “If This Video Doesn’t Convince You to Put Down Your Phone, Nothing Probably Will.” Normally I don’t click on shit like this because it’s either spam or some article written by a fuckwit to generate views for a poorly run website, but based on the person who shared the video, I decided to give it a try.

It led with something to the tune of “On average, humans spend about four years of their lives staring at a phone screen.” That was all I needed. I watched the video in its entirety, but I couldn’t quite get past the opening gambit. 4 years? 4 whole years? This sparked something inside of me. I had an epiphany.

Where the fuck am I going in life? I thought. No where! It’s a truth I’ve known for a while, but I’ve been scared to face. I can’t be a writer if I never write. It just doesn’t work like that.

I have written a grand total of 4 short stories since October, and two of them were for school assignments. That’s a big problem. I need to be finishing 4 a month. On my own. Not for school. Basically, I have to start doing everything I’m not currently.

I knew immediately that the best thing to do would be to delete all forms of social media, because that’s where I waste the majority of my time. I needed to, but I’m a realist, not a dumbass. I have to have a platform. I have to be able to connect with people. That wasn’t going to work.

I decided to try an experiment. I put my phone in a drawer on the opposite side of the room and left it there for an hour. I was floored by the results.

The first thing I did during the most important hour of my time in recent memory was think. I thought about everything in my life that needed change. I thought of ways to make those changes. I began to make them.

I went on Amazon and ordered workout supplements. I’m going to the gym again next week. I’m not stopping until I’m in shape. My arm is no longer an excuse.

I changed my laptop backgroud to something that would inspire me to better myself. Gone are the days of opening my computer and quickly losing myself in the depths of Buzzfeed. Instead, I’ll see this: 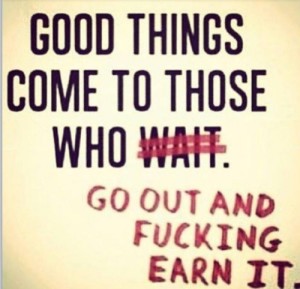 I’ve gotta keep that motto in mind. I can’t waste time doing pointless shit anymore. I imposed a daily word limit on myself. I can’t surf the internet for pleasure until I’ve written at least a thousand words. Even at that, I only get an hour a day. I don’t benefit from watching viral cat videos and taking quizzes to find out what city I should be living in. I need to grow up and maximize productivity.

Initially, when I began writing this post, my intent was to share my story in hopes that somebody, somewhere, would see this and maybe get some peace of mind or advice from it. Now, as I near the end of it, I think I’m doing it more for me. This will be my first post in a little over three months, and I’m hoping it’ll mark a turning point. I’m hoping I’ll jump from here and never look back.

For now, I’m just gonna keep on climbin’ that ladder. I think I’ve now got what it takes to reach the top.

Thanks for listening to me ramble, folks. I’ll be back with something new soon, cause, you know, I’m motivated now.