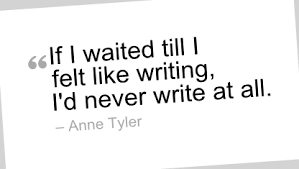 “So how’s the book coming?”

“What?” I thought I’d heard the words right, but I needed time to formulate an acceptable response. I was busy stocking the shelves at the store I work at in the summers, and my manager, innocently enough, asked how my writing was going, as she remembered that I wanted to be an author from my time there last summer.

That seemed to jump around the question well enough, and the conversation moved elsewhere. But my mind didn’t.

It really got me thinking: I’m always asked how project A or B is going, when I’m going to make another blog post (which, with my given track record, who knows if this will even get published today). It unsettles me every time because the real answer is always the same. The projects aren’t going. I have no fuckin’ clue when I’m going to make my next blog post. I don’t even know if I can do this anymore.

As these thoughts run through my head, they are always coupled with some other, more dominant ones. You have to do this. You will succeed. It’ll be okay. You’ll make a breakthrough tomorrow.

I have a big problem with this mentality, though. It’s like when parents tell their children “You can be anything you want to when you grow up! You just have to set your mind to it!” Sorry kiddos, but that is a bunch of bullshit. Not everyone can be president, and you aren’t gonna make it to the league. Hard work can only take you so far. It’s the “everything will be fine” attitude that has screwed up our country beyond belief, but that’s an issue for another day (probably when I’m pissed off and need to vent).

I’m smart enough to know that if I don’t change something, and quickly, I’m fucked. That pricey degree from the college I’m paying way too much to attend? It won’t mean anything if I can’t figure out a way to make people want to read the crap that I make up. I have to start now. It’s do or die time.

I know I’ve said this in about every other blog post that tries to apologize for some form of extended hiatus, but this post is not an apology. You know what? I’m not fucking sorry for an absence of over three months. Sometimes, you just have to take “me time” and sometimes “me time” does not involve this. I’d like it to, but when my brain doesn’t come up with anything interesting to talk about, I don’t post. I’d rather put out content every once in a while with meaning and substance than I would mindlessly churn out consistent piles of cow shit.

It’s not that I don’t try to write. I do. More often than not, I’ll start something, get way too caught up in it, get some key details tangled up, say fuck it, and throw it all away. And that’s on a good day. Other times, I’ll sit there and begin typing, just trying to find some sort of inspiration, and it ends up turning into a story that bores the shit outta me. People won’t read it if the person who wrote it knows it sucks (exception: James Patterson).

Failure is one of my biggest motivators. I write because it’s all I’ve been able to see myself doing since I was in middle school. I’ve had my post-college life planned out for years. I write because it’s the only thing I know I can do. Sure, I’d be okay at some other professions, but they’d be boring, dead-end jobs with low ceilings and shitty hours. I prefer to make my own. I write because that’s all I’ve ever been known as. “Oh, that’s Eric. He wants to write books someday. He might actually do it.” Words like those keep me going. I can’t give up. I want to show the people who believed in me that they were right, that I could do it.

Finally, I write because I have to. I can’t get through a day without thinking “Wow, that’d make a great story,” or “Damn, I should write that.” It’s in my head all the time. I can’t escape it. Yet when it comes to putting stuff on paper, I’ve found it very difficult as of late. I can’t honestly answer people when they ask me how my writing is coming along. I get ashamed and then feel as if I’m going nowhere. It’s a never ending cycle.

Recently, I found inspiration in a rap song that I was listening to while at the gym the other day. It said, “Work hard till the sun up, cause being turnt down is just a part of the come up.” Despite those obvious grammar flaws the rap genre is known for, there was a message there for me. All of the people who are at the top of their respective professions got there because the put in the extra hours, because they suffered through the sleepless nights. I guess it’s time I did the same.

I know I can do this. I’ve known I’ve had the ability for a long time, but I’ve been far too immature to do anything with it. I can’t go on doing what I’m doing. When I don’t write, it nags at me. When I do, I nag at myself because it isn’t good enough. But enough of that shit. It’s time to make it good enough. It’s time to do this. Join me on the journey or don’t. Write this off as another crazy dumbass who thinks his shred of raw talent will take him to the top. It makes no difference to me. I’ll be sure to remember this day on the acknowledgments page of my first novel or story collection.

I’ve been tinkering with new ways to get my creative juices flowing. I’m seriously thinking about starting a new, baseball-themed blog, where that’s literally all I talk about. Both blogs will remain active. More on this idea in the future.

Also, I’m going to try and put out at least one story on Amazon this summer. It’s a modest goal, but a doable one. I’ll keep you updated on that as well.