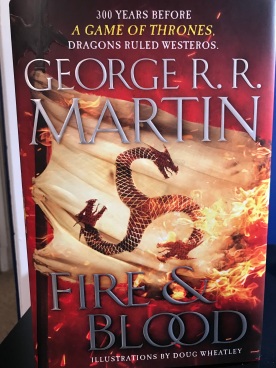 At this point in its life cycle, everyone knows George R.R. Martin’s A Song of Ice and Fire series–which burst onto the fantasy scene in 1996 and amassed cultural clout with the arrival of the HBO adaption in 2011– isn’t going to be completed any time soon. It’s been eight years since the last main-series installment, and, while we’ve been given numerous ASIOF themed books and spinoffs, things have gotten to the point now where the TV series has surpassed the show, and fans who don’t want things spoiled for them (that’s me) will have to hide under a rock for years starting this April, It sucks, but that’s the way it is.

Our constant clamoring for the sixth book in the series, The Winds of Winter, has been heard by Mr. Martin, and while he has continued work to work on the book since the completion of the last one, he’s shared his struggles with completion time and time again.  It’s unfathomable why writing a series with literally hundreds of characters and nearly 5,000 pages of text might get difficult after the fifth book, but George has been having a time with it*. For those of you who are more addicted to ASIOF than a rat to cocaine, there is a silver lining: The end of November saw the release of Fire and Blood, a Game of Thrones .5, if you will. The book is the first part in a two-volume history that takes readers back 300 years before the events of A Song of Ice and Fire, to a land ruled by dragons and those damned Targaryens about whom everyone in the main series keeps talking. Fire and Blood is less novel and more textbook, opting for a (mostly) linear march through time as it chronicles the reign of every Westeros king from Aegon the Conqueror to Aegon III. The book is teeming with historical information, and if you’ve ever wanted to know how Maegor’s Holdfast got its name, Fire and Blood can deliver than answer. It’s absolutely fantastic if you’re immersed in the Ice and Fire universe, but readers who have only dabbled in the first book or two would probably be better served staying away.  Though compelling and characteristically witty, Fire and Blood only sustains its charm for so long. Eventually, it becomes a laundry list of names and places with little significance to the average fan who likes to watch direwolves bite Lannisters. Fire and Blood caters to the niche ASIOF fan, and unless you fit that bill, you may want to wait out The Winds of Winter with the rest of the world.

Fire and Blood is chronicled by Archmaester Gyldayn of Oldtown, whose own life remains somewhat of a mystery. The “text” draws from a number of primary sources, including past maesters and septons, each of whom provide conflicting accounts of events and make the story a farce of unreliability. Undoubtedly, the source who steals the show is Mushroom, a king’s fool, who, if you believe his accounts, was almost everywhere of significance and is the only person audiences can trust to learn the truth of things. In true GRRM fashion, Mushroom is used as the voice to add most of the devious sexual stuff, as he prefers to embellish upon what likely happened in order to keep his name relevant. To be frank, it’s downright hilarious. Through a combination of books, histories, and word of mouth, Fire and Blood takes us from the moment Aegon I set foot on Westerosi soil (and subsequently used his dragons to unify the land) and leaves us as Aegon III begins his rule over a hundred years later. Along the way, there’s everything one could expect from a GOT novel–sex, dragons, and murder–with a heavy emphasis on the latter two.

If nothing else, Fire and Blood does what it’s supposed to, and it does so incredibly well. Quality cannot be debated with this title. Though it’s taken the man more more than a quarter of my life to come out with his next major book, no one can accuse George R.R. Martin of screwing around any longer. Fire and Blood is masterful. Admittedly, I don’t read much fantasy, but I have to imagine that, when one writes a history of a world, this is how one does it. Fire and Blood floods readers with more information than they knew they needed–can you honestly say that you cared to know that Rhaenryra Targaryen launched an all-out assault on her half-brother’s throne because she was skipped over on account of gender? That House Strong of Westeros died off when Larys the Clubfoot was executed by Cregan Stark for treason? I’m going to guess the answer is no, because you probably didn’t know those characters existed beforehand. The book is extensive, brilliantly “researched”, and plausible. At the very least, Fire and Blood provides backstories for those names to which Martin frequently alludes in his main story.

The biggest detractor to what could have been nearly universal success for the book is, unsurprisingly, its length. Checking in with a whopping 700-page hardcover edition, this is the kind of thing we have come to expect from George R.R. Martin, but it probably wasn’t the best route to take with a project like this. Though I clung to every word in the beginning (the rule of Jaehaerys and Alysanne were of particular interest to me) the style in which this book is written grates on you quickly. It’s whimsical and doesn’t take itself too seriously, but at the end of the day it remains a history littered with names, dates, and places that are damn near impossible to keep straight unless you keep score on a notebook as you read. I found myself caring less and less about each successive king’s reign, and even the most traditionally-GOT chunk of the book, the stories from the Dance of Dragons, were overdrawn and tired upon their conclusion. By the time Aegon III takes the throne under regency, I was ready to be done. That isn’t to say his reign isn’t important to the overall story, just that everything was drawn out to a point where his section became unenjoyable.

My thoughts on Fire and Blood remain conflicted, and maybe its because I fall somewhere on the middle of my own suggested spectrum for picking up this book. On one hand, it’s the epitome of A Song of Ice and Fire. On the other, I loathe fantasy books that move at a slow pace and inundate you with unimportant strawmen in the name of being immersive.  To be sure, Fire and Blood does both of these. I am convinced that skimping on some of the overdone things like courtroom drama and familial bickering could have streamlined the story a bit more, and spending less time on ultimately unimportant kings who happened to be in the line of succession would have helped as well. Fire and Blood is a book that needs to feel fresh to stay in peak form, and there are swaths of it that could use work in that regard. Overall, it is enjoyable, but only if you’re willing to put in some real legwork to slog through the muddy parts.

If you’re a fan of the ASIOF series and are sincerely torn about picking this one up, I would. It’s probably worth it in the long run. My suggestion is not to read the book straight through. Instead, actually treat it like a textbook, or a series of short stories if that’s how you prefer to look at it. Read a chapter at a time, put it down and read something else for a few days, then jump back in. Piece it together, and you probably won’t suffer from the burnout I did and you’ll walk away much happier for it.

Up Next: I’ll be re-reading Justin Cronin’s The Passage before moving on to the other two books in that series. The Fox show has me wanting to revisit and complete my time spent in that world. I’m loving the first book every bit as much as I did in 2016. I may have to use Pet Sematary as a break in the story, though, because I have not yet read it but that trailer looks INTENSE. Let me know in the comments if you’ve got thoughts on that novel.

Editor’s Note: *In all seriousness, keep at it, George. You rock and you’ve got nothing but support from this camp.

2 thoughts on “Fire and Blood by George R.R. Martin: Perfect for the Hardcore “A Song of Ice and Fire” Fan, but Probably not for You”