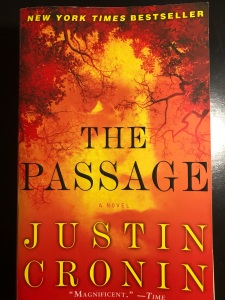 If you watch cable television these days, it’s a safe bet that you’ve seen an ad for a FOX show called The Passage, a drama starring Mark-Paul Gosselear, Henry Ian Cusick, and up-and-coming actress Saniyya Sidney. FOX’s marketing campaign was extensive, with ads beginning in the weeks leading up to the premiere and showcasing scenes of intense gunfights and fiery explosions.  The Passage seems all but destined to be a moneymaker for the network; it contains all the elements of compelling TV: pretty people, intense action, and evil monsters trying to destroy them all.

For those uninformed, The Passage is based on a series of books from author Justin Cronin, the first of them being the book from which the TV show takes its name. It first came across my radar in 2012, when I saw it on Complex.com’s list of The 25 Best Horror Novels of the New Millennium. I’ve just finished my second reading of the novel, and let me tell you–it more than lives up to that billing. The Passage reclaims vampires for the horror genre, but that’s just the tip of the iceberg. Surprisingly literary, the true horror comes less from the blood and guts and more from the characters’ constant struggle for survival in a ruined world. The Passage takes readers around an unrecognizable United States, meandering at times but ultimately reaching its destination in climactic fashion; it more than sets the table for the rest of the series, but it’s also strong enough to stand alone. Think Dracula meets The Stand, but with better writing. Sign me up.  END_OF_DOCUMENT_TOKEN_TO_BE_REPLACED