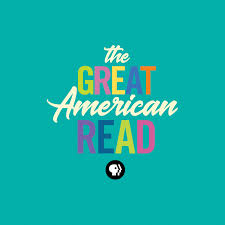 A few weeks ago, I was lucky enough to overhear and advertisement for PBS’ new show, The Great American Read, hosted by Meredith Vieira. I’ll link the trailer at the bottom, but for those unfamiliar, PBS polled thousands of people to come up with a list of 100 novels that Americans have cherished throughout the years. Over the summer months, viewers are encouraged to vote for their favorite novel on the list, and from what I understand, the book with the most votes will be announced in October as “The Great American Read.” I would have preferred a bracket-style format myself, but beggars can’t be choosers. At any rate, the show provides a decent look at some of the most influential books in America.

Since I’m a giant book nerd (it’s probable that I’ll be going back to school to study literature at the graduate level) I decided to have some fun with this. I’ve made it my mission to read every book on this list, from start to finish, with no other books in between. I MAY simultaneously read a non-fiction book or two for my own self-development, but those don’t count. Each week, I’ll post an update, and as I finish each book, I’ll post a corresponding review. As I go, I’ll rank each title from best to worst, and by the end, the random list of 100 will have best-to-worst rankings to go with it. Lastly, I would LOVE for anyone reading this to join along, so make sure to drop a comment below if you’re interested. I’ll set up a Facebook group if I get enough traction. I’ll get into the specifics of my process in a minute, but for now, take a look at the list yourself and see if this is anything you might be interested in.

Before I started, I went through and counted how many books on the list I’d read before. I checked in at a lowly 20, which is kinda pathetic but also very exciting. There are lots of new books to explore, and you’ll never hear me complaining about that.

My initial thought was to space the re-reads out every fifth book, avoiding having to re-read them all in one mass at the end and increasing the likelihood I finish this out. However, I ended up going a much-nerdier,  but more fun route. I enlisted the help of my mother, a seventh grade English teacher and bibliophile in her own right, and together we drafted the list–literally. We printed it out and alternated picks to determine reading order. I chose The Lord of the Rings first, and she chose The Book Thief immediately after. We did this a total of 50 times, and what resulted is a rather fun way to attack this reading project together. At the tail end, we were each afforded the opportunity to “revise” one of our picks. I abstained, but my mom swapped Frankenstein with A Game of Thrones. More on that later. Other than that, the list is pretty straightforward–should you find yourself interested enough to join, this is the order you should follow.

It’s important to note that we didn’t just draft our favorites or the books we hadn’t yet read. We tried to strike a balance between the heavy hitters and the beach reads, more for our own sanity than anything else. This is why you’ll see something like War and Peace followed by something mindless, like Twilight or 50 Shades of Grey. We made the pact to get through them all, and we tried to craft the list in an order that would give us the best chance of doing so.

On book series: Most times, we are only reading the first book in the series. Lord of the Rings counts as a single work, so we’ll go through all three parts of that. In the case of The Chronicles of Narnia, we’ve both read The Lion, the Witch, and the Wardrobe so many times that we decided to just pick one at random. With things like The Wheel of Time and A Song of Ice and Fire, book one is book done.

One, final, thing I should mention: Our printer had a mishap and we were missing three books and didn’t realize it until it came time to do the final 10. The Pillars of the Earth, A Separate Peace, and The Sun Also Rises may have been drafted earlier, but we screwed up, so they’re lodged near the end. Don’t get offended if one of those is your favorite.

So there you have it. Here’s our list, in all its glory. From here, check the Blogroll page of my site to watch the fun unfold. I’ll be doing the updating solo–my mom will be reading along with me, but she’s more or less done with the site. I may pull a quote or two from her if they’re particulalry funny or poignant. I’m already in the middle of The Fellowship of the Ring, so let the games begin!

Don’t be afraid to join me on this journey, and make sure to let me know if/when you do! Reading is always made better when you have people to disucss it with, so don’t be shy! Start today, and leave a comment with your email address below to make sure you don’t miss out on anything!